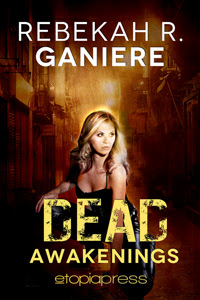 A band of pale skinned men, led by the gorgeous Luca, burst in, whisking her away to safety. Evaine's attraction to Luca is instantaneous, but he's so hell-bent on stopping the experimentations, he has no time for the feelings she's awakening within him.

At Haven House, Evaine is introduced to The Family and told that she, like all of them, have become a Deader. A reanimated Undead.

Evaine struggles not only to fit into her new world, but also with desires, cravings and powers she has never felt before. The connection between Luca and herself intensifies when suddenly she remembers not only who she is, but also her human fiancé, Tristan; who is still looking for her.

Torn between her first love and her new heart’s desire, Evaine runs back to Tristan putting everyone in danger. And when a rogue faction of Deaders, called Feeders, attempts to kidnap her, Luca suspects Evaine is the key to the experiments. Can everyone band together to keep Evaine off the cutting table of those she escaped from? Or will second death tear her away from Luca and Tristan forever?

Add it on GoodReads

4 stars
**** I received an ARC copy for an honest review ****
Ok so I have to say I am not a fan of paranormal romance. but I really enjoy reading this book, this was something that I was not expecting, and it was really different from what I am used to reading, so I am gone keep this short.
Evaine is a student struggling to become an actress but she is also living a fairytale, a girl from the trailer park engaged to wealthy and handsome Tristan, suddenly one day she wakes up and don't have no memory and found out that she is undead, she is trying to remember her old life and adjust to her new flesh eating, night dwelling world. Evaine finds herself with some supernatural abilities and is adopted Heaven house, a collective of undead who try to remain moral and keep their desire for human flesh in check, that's when her world get more complicated, she is caught up between two love, her life fiancé and her dead soul mate Luca, Luca is strong and brooding, sweet and compassionate, gorgeous, and He is trying to fight the pull Evaine has on him, but cannot fight their connection. All he wants is to keep her safe.
I really enjoy reading this book Author Rebekah R. Ganiere THANK YOU for introducing me to this awesome characters and this great book.

Rebekah's love for stories began as a child with Shel Silverstein poetry. She began writing her own poetry and short stories in junior high and high school. She then went on to study theater in college and ultimately ended up going back to writing. When she isn't spending time telling the stories of the characters constantly chattering inside her head, you can find her hanging out with her husband, four children and menagerie of pets. Rebekah is a member of Romance Writers of America as well as the Fantasy, Futuristic, & Paranormal Chapter, her local Los Angeles chapter, Orange County chapter and Young Adult chapters.


a Rafflecopter giveaway >
Posted by Unknown at Wednesday, January 22, 2014