Synopsis
Perfection is a gimmick.

It’s something they use to sell you shit you don’t need. The perfect home. The perfect family. The perfect marriage. Photos of that perfect life are all around us, but none of it exists.

I know better because I take those photos. It’s all a ruse to make us think that's what we want. Behind closed doors, the house is a mess, the family is fighting, and that loving couple hates each other. I prefer a different city every week, laughing friends, and a variety of lovers.

Until Carl. I’m not sure what I want when he’s around.

Perfection is an illusion.

It’s something used to make you forget all the bad shit that happens in this world. It’s an unattainable dream not worth the effort.

I had the perfect home. The perfect family. The perfect marriage. Or so I thought. That illusion died with my wife and slammed me into reality. Aside from my daughter, business deals and making money is where my heart is now.

Until Rachael. I’m not sure what I feel when she’s around. 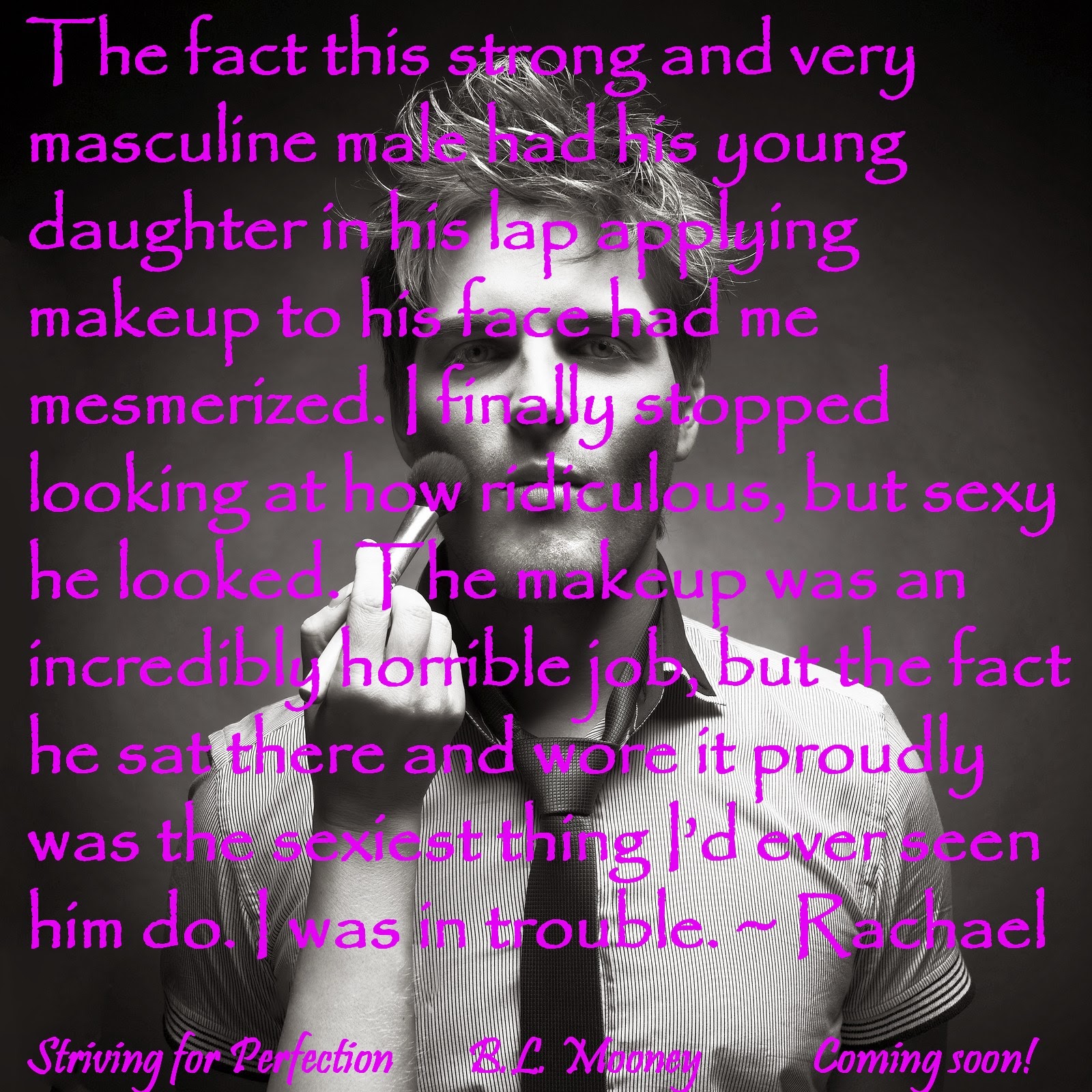 Excerpt
I put my body into as tight of a ball as possible when Carl got behind me. Every time he tried to get into my shirt, I jabbed his ribs with my elbow. Every once in a while he would get his hands in between my arms and squeeze my breasts. It was when his hand roamed lower between my legs that I’d had enough. I stomped on his foot and elbowed his gut.

“For crying out loud, Rachael! Give it to me!”

“No!” I fought him even harder until he backed away.


We both stood catching our breaths. “You are impossible.” He had his hands on his hips as he walked to the door.

“Me? You’re the one trying to cop a feel during our scuffle.”

“I was trying to see if I could feel it in your bra.”


I tilted my head and scowled at him. “My bra is up here.” I pointed to the girls.

The smirk that started to spread across his face told me he knew exactly what he had done. “Hey, you can’t expect a man to wrap himself around you and not try to take advantage.”


I sat at my desk and wiped away dust that wasn’t there. “No one takes advantage of me.”

He looked thoughtful for a moment as his eyes squinted a little. “You win this round, Rach.” He reached for the door. “Watch out for round two.”

I stopped him before he touched the door. “Carl.” He turned as I reached into my desk drawer and pulled out the right flash drive. I tossed it to him.


He was stunned and fumbled, but caught it. “What’s in your bra?”


I shook my head. “My copy of the photos. It’s just a small lesson, Carl. You won’t get anything from me until I’m ready to give it.”

He stood there longer than I wanted him to, but I refused to look up at him to see what he was doing. I wanted to act as if his presence hadn’t bothered me. I wasn’t going to keep that hidden for long. He started to walk toward me.

“Let’s start over. There shouldn’t be hostility. We’re adults and things didn’t work out for us personally, but I really believe we could work well together.”

I stopped moving the mouse, but I didn’t look up at him. “Just forget everything?” I shook my head. “I don’t think I can do that.” I went back to work.

Carl reached down and covered my hand with his. “Then how about a truce?”

I looked at his hand covering mine until he removed it. “Fine.” I looked up to him. “But keep your hands to yourself.”

He held his hands up in mock surrender and smiled. “You make that kind of difficult, but I’ll try.”

“You’ll do more than try if you want to keep all of your appendages.” I looked him right in the eyes. “And don’t underestimate me.” I went back to work. “Follow those two rules and we’ll be fine.”

He looked at the flash drive still in his other hand and nodded. “No touching and don’t underestimate you. Anything else?”


“Hey, are you looking at the photos now?” He started to come around the desk.

“No, Carl. Those are in my bra.” I swiveled in the chair to face him.


“Here, use mine. I really want to look at these, and I have a ton of meetings when I go back.” He held out his flash drive as I reached up to take it. He grabbed my hand, yanking me out of my chair. Before I could stop him, both of my hands were behind my back with one of his hands holding them together.

He tossed his flash drive on the desk and ran his hand through his hair. He smiled. “That was easier than I thought.”

I tried to break free, but his hand only got tighter. “You will regret this.”

“Maybe, but it will be worth it.” He moved his hand up to the top button on my blouse. I closed my eyes as he started to unfasten them. He stopped on the third one and I looked at him again. “Keep your eyes open or it’s going to take even longer.”

I whispered, “What are you doing, Carl?”

He continued to the last button above my slacks. He spread my shirt open, grazing my belly with his fingers. I hated how much I still wanted him. I hated that I was thankful for him holding my hands or I would’ve attacked him on my desk. He started at my belly button and slid his fingers up toward my breasts. If he reached them, it would be over and I would beg him to fuck me. I started fighting harder this time, breaking one hand free.

“Whoa!” He grabbed my hand and placed it behind my back. It caused him to get closer to my face, but at least he wasn’t touching more than my hands. “I’m just trying to help you.” He looked at my bra and smiled. “Red is my favorite color. Thank you for wearing it today.”

My eyes went wide as I watched him lower his head to my breasts. I swore I would never allow myself to get mixed up with this man again and yet, that was exactly what was going to happen. I felt his tongue against my skin and tried not to react. I closed my eyes when I felt his teeth graze me.

I opened my eyes when I felt him stand. Between his teeth, he had the flash drive I’d hidden in my bra. He bent over and let it drop to the desk. He turned back to me with a devilish look and smiled. He looked back down to my breasts and licked his lips.

He looked in my eyes and smiled. “You enjoyed that.”

“I’m going to enjoy killing you much, much more.”


He looked at my breasts again. “Well, your nipples don’t lie.”

“I need to button up. Please let me go.”

“See, asking nicely will get you—” He let go, and I slapped him across the face.

I walked around the other side of the desk, buttoning my shirt as quickly as possible on my way to unlock and open the office door. I couldn’t be in a secluded setting with him anymore. I turned around and ran into his chest. He slammed the door shut behind me.

“Don’t you ever do that again.” His voice was quiet and firm as he spoke through gritted teeth.

“And don’t you ever do that again.” I matched his tone as I pointed back to the desk. “You will respect me or I’ll aim a little lower next time.” I opened the door again. “Out!"

B.L. Mooney started writing when the voices and storylines in her head ran out of room. They were getting too cramped and neither B.L. nor the characters could take it anymore, so she did the only thing she could do—she made room. She always knew she wanted to write, but vowed to make time for it later. Now that she’s made time for writing, most everything else falls to the wayside. That seems to suit the characters that keep popping up in her head just fine.

B.L. lives in the Midwest, and her other talents include in-demand cookies, a very dry sense of humor, and stealth eavesdropping. Some mannerisms, attitudes, or twists come from random sentences picked up while passing by strangers. So speak up the next time you have something to gossip about. You never know, it may just end up on the pages of the next book you read.

She loves to hear from her readers and you can contact her via email at AuthorBLMooney@gmail.com 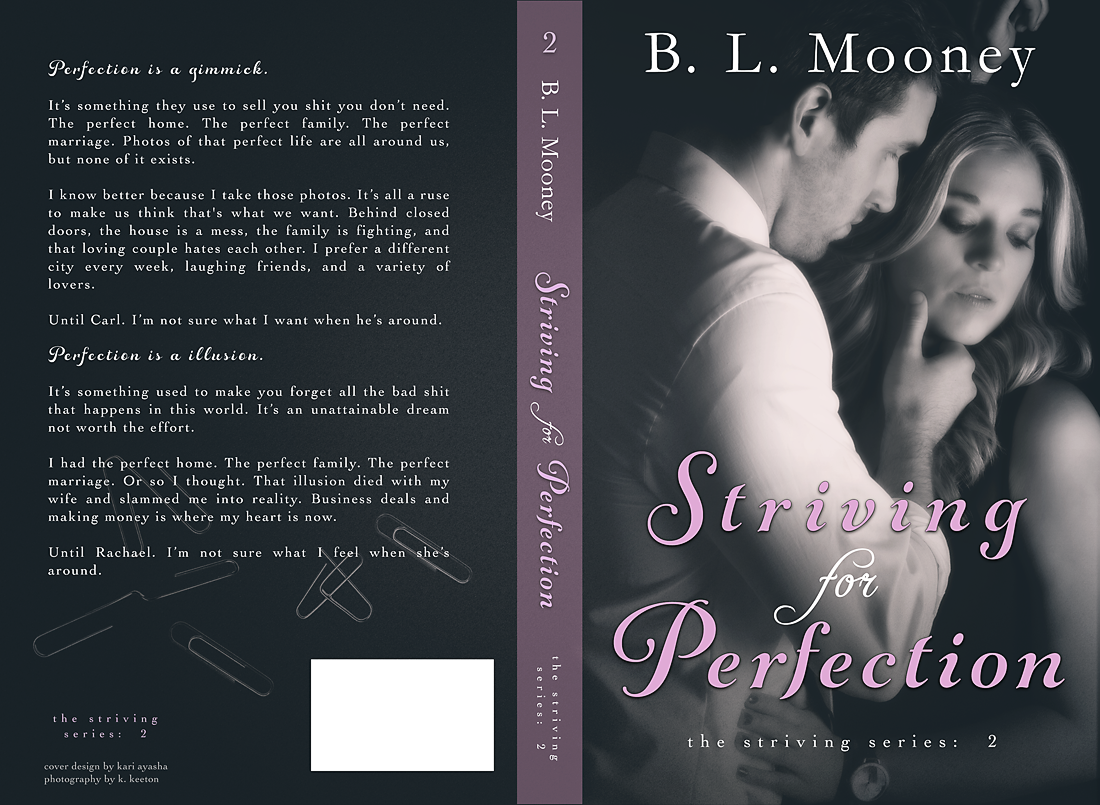 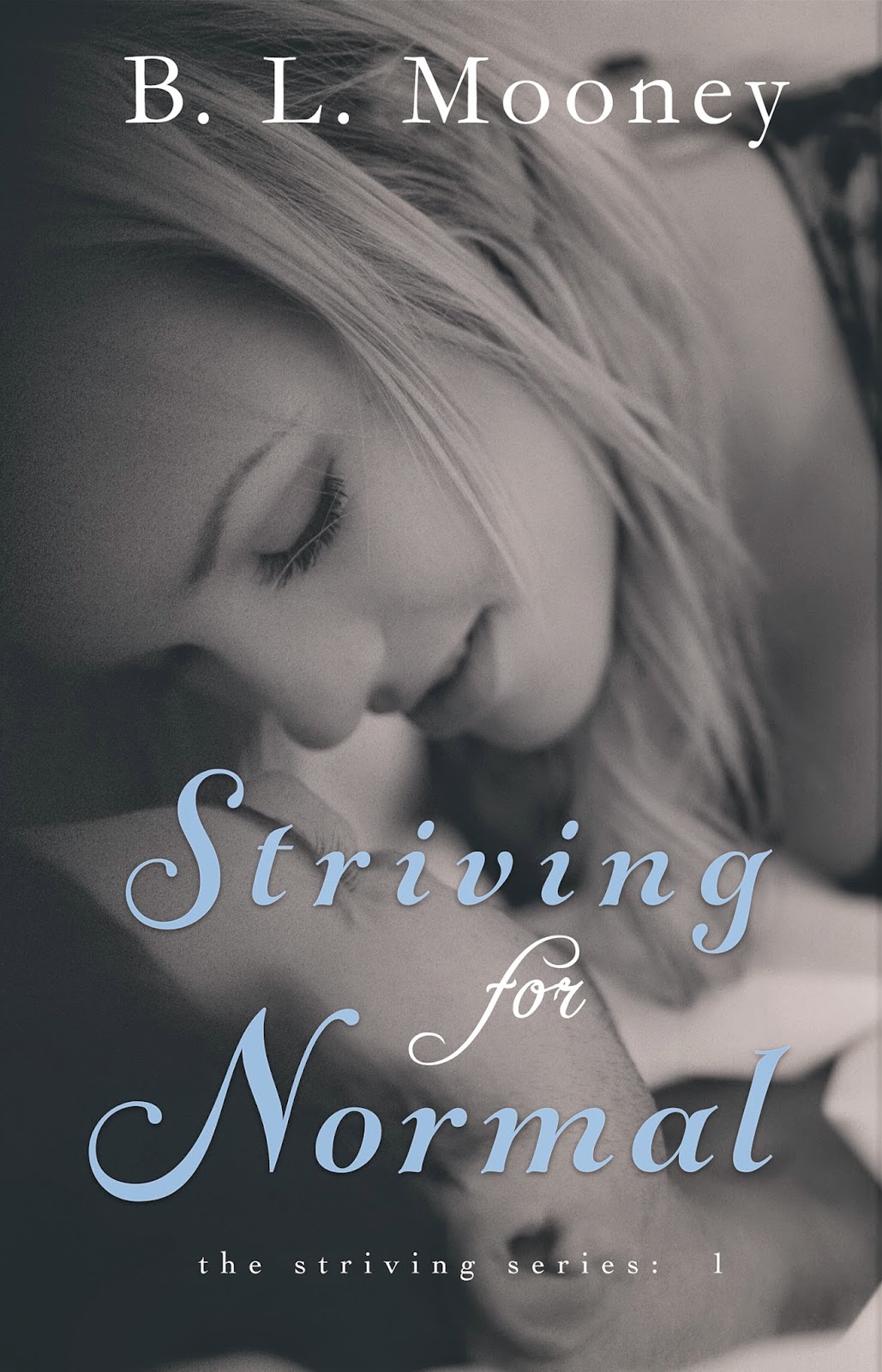 First in the Striving Series, but can be read as a stand alone.

Normal. It’s a relative term, or so I thought. It wasn’t until I got caught up with a man who stripped me of my confidence, dignity, and trust that I realized I was no longer normal. I did things and became part of things I never thought I would have.

I was content in my shell, living what life I allowed myself to live. Both my best friend and therapist had different ideas. They wanted more for me and saw to it that I wanted more, too. When life started to open new possibilities I thought I no longer deserved, it also brought back old ones I thought would never return.

How do I move on from a past that won’t let me go or move into a future I’m not sure I’m ready for? Am I strong enough to go after what I want and say no to those things that try to pull me in again? More importantly, will I ever be at peace with myself as I’m Striving for Normal?

Ages 18+ due to adult situations and violence. 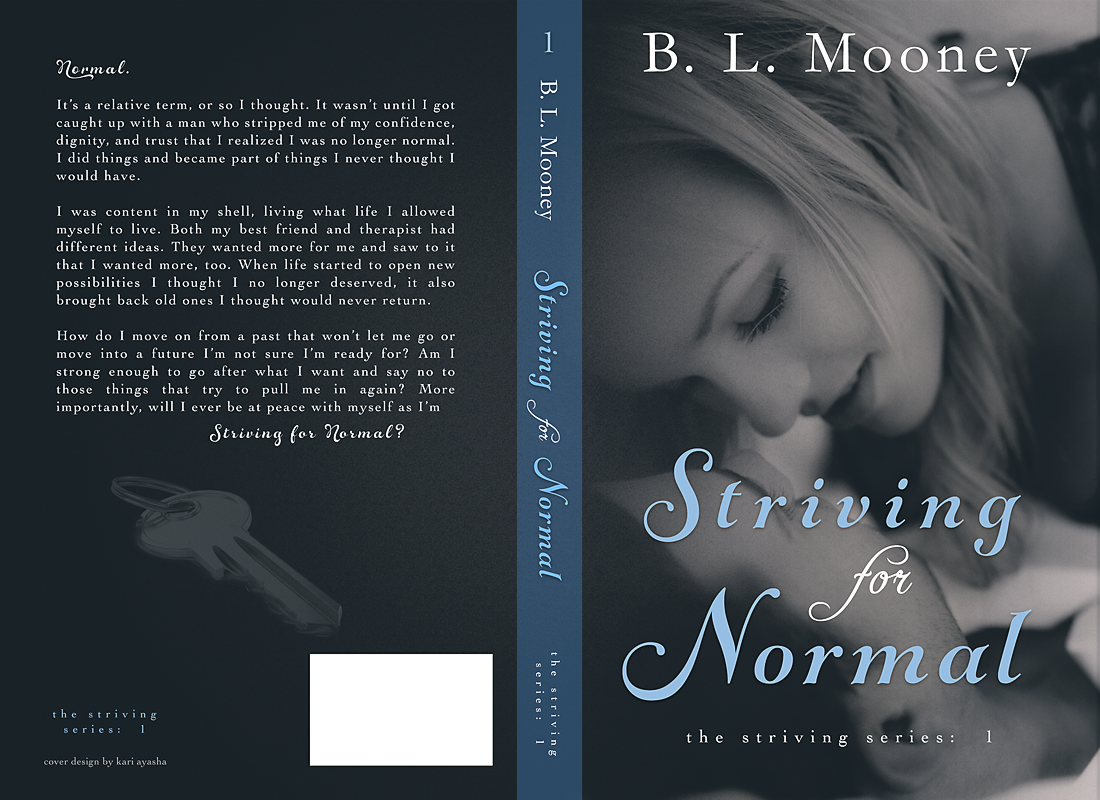 Posted by Unknown at Wednesday, August 20, 2014 No comments: