Only For You By E.L. Todd

﻿
Title: Only For You 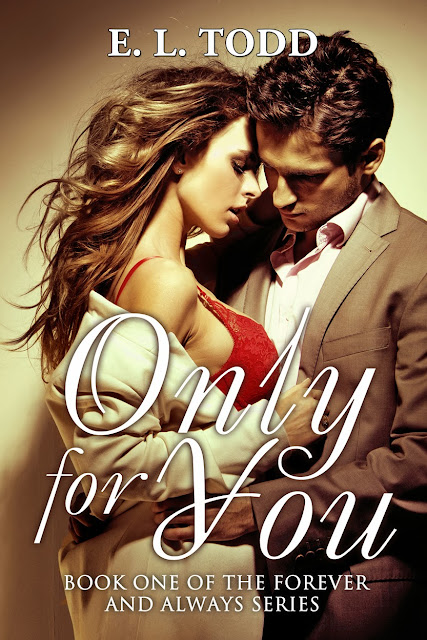 When Scarlet realized Penelope was dumping Sean, her best friend, she was devastated. Penelope was the love of his life, the woman of his dreams. Scarlet knew how far her best friend was going to fall and she had to catch him. Scarlet became Sean’s rock and helped him through a very painful breakup, but her own hidden desires bubbled to the surface in the process. When they finally gave in and slept together, she thought it was the start of their new relationship. Unfortunately, Sean didn’t feel the same.

Humiliated and heartbroken, Scarlet moved across the country and found what she least expected. She rekindled her damaged relationship with her brother, who she hadn’t spoken to in a year, and her brother’s best friend was attractive and interesting. Their relationship was natural and unforced, and she was immediately drawn to him. Would she be able to get over Sean, forget about him, by sleeping with Cortland, or would that just be another repeated mistake?
Buy Link
Amazon = http://www.amazon.com/Only-For-Forever-Always-Volume/dp/149295490X/ref=cm_aya_orig_subj
﻿
About The Author  E.L. Todd


My journey to this profession was slightly unorthodox. I received my bachelor's degree in biological sciences, worked as an award-winning researcher, and worked various jobs to pay the bills. While I enjoyed every moment of this adventure,
it wasn't my passion. I've been writing since I was a young girl and have read anything that I can get my hands on. When people ask me what my favorite book is, I always respond, "All of them."

After I showed my work to my closest friends and gained their confidence, I realized that this is something I could
commit my life to, something that I love. I never imagined--dreamed--that I could make a living as a writer. This is the greatest profession that I ever could have asked for, and I am so thankful for the support from everyone in my
life. How many other jobs let you work in your pajamas?

My first novel, Soul Catcher, was released in August 2013, and my second novel, Soul Binders, will be released this fall. The Saga concludes in early 2014. I hope you've enjoyed reading this series as much as I've enjoyed writing it

First I want to say that this is the first book, that I get to read from this author, and HOLY HELL I Love every single minute of it I couldn't put this book down at all that's how much I was into it. this book is full of comedy, romance, and drama, and I do love my books that have drama in it, I love the characters even though sometime some of them got on my nerves but I love them anyway, I have to say that I cried and laugh and got mad, while reading this book but it was all good that just made me love the story even more, and I love it how you get to see it from both point view.

The story beginnings with Scarlet, having lunch with her best friend girlfriend Penelope, when they were having lunch Penelope told Scarlet that she was braking up with Sean, Scarlet got mad and confuse she couldn't believe why would some one break up with a great man like Sean, who has a great job come from a great wealthy family and he such a sweet heart, that's when scarlet when to Sean apartment to find him down and heart broken, and that's when they started spend time together.

At the same time that Sean was feeling horrible Scarlet was keeping secrets from him, about what was going on, on her job with the perverted of her boss, but all that change when she agree to g with Sean to a dinner from his job, that night they got a little to much to drink and they both cross the line, after that night everything just when up side down from their, she end up with a broken heart and with out a job, so she move in with her brother.

I really enjoy this book and now I cant wait to read the next book, I hope that once you read it that you get to enjoy it and love it as much as I did.

Author E.L. Todd THANK YOU SO MUCH FOR GIVING ME THE CHANCE TO READ THIS AWESOME BOOK AND FOR INTRODUCING ME TO THIS AMAZING CHARACTERS. now you gain one more Fan :)