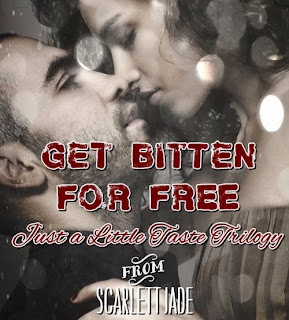 Title: Just a Little Taste book One (The Trilogy) 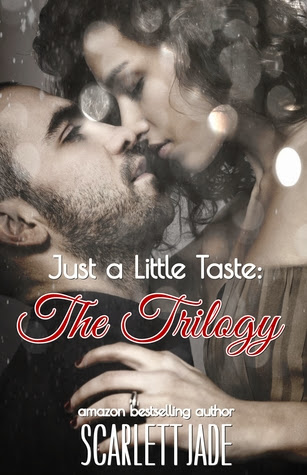 Recommended for 18+ due to sexual scenes and adult language. This book includes ALL THREE novellas in one. (Love at First Bite, Once Bitten, Twice Shy, and Third Time's A Charm as a box set.)

That’s the kind of love that is between Jeremy and Sasha.

Jeremy Parks never thought he’d find someone who would understand him and accept him for who and what he was. But, when Sasha shows up practically at his doorstep, bloodied and in danger of dying, he can’t stop the overwhelming feeling of protection that washes through him. Now, he’ll do whatever it takes to keep her safe… Even from him.

Sasha Jones didn’t know how she ended up in Jeremy’s arms, but the dangerous and extremely sexy vampire/werewolf intrigues her. She can’t get enough of him; his hands on her body,
his mouth on her own lips, his eyes boring into hers. She has a feeling that he is misunderstood, but she understands just fine… She understands that she could fast fall in love with him and his fangs. But, when destiny intervenes, their relationship suffers, slightly, battling the twists and turns of their lives and their love; including memory loss, blood lust, and even a baby.

What will happen to them?

Find out in this trilogy of stories that push you to the brink. You’ll never feel the same about vampires again, and you’ll want one of your very own too.

Remember, just because someone is different,
doesn’t mean they aren’t worth your time and your heart…