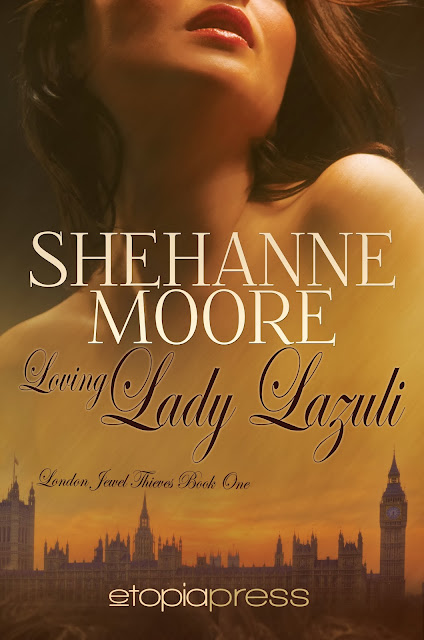 Only one man in England can identify her. Unfortunately he’s living next door.

Ten years ago sixteen year old Sapphire, the greatest jewel thief England has ever known, ruined Lord Devorlane Hawley’s life. Now she’s dead and buried, all the respectable widow, Cassidy Armstrong, wants is the chance to prove who she really is.

But not only does her new neighbor believe he knows that exactly, he’s hell-bent on revenge. All he needs is the actual proof. So when he asks her to choose between being his mistress, or dangling on the end of a rope, only Sapphire can decide…

What’s left for a woman with nowhere left to go, but to stay exactly where she is?

And hope, that when it comes to neighbors, Devorlane Hawley won’t prove to be the one from hell.

Shehanne Moore writes gritty, witty, historical romance, set wherever takes her fancy. What hasn’t she worked at while pursuing her dream of becoming a published author? Shehanne lives in Scotland with her husband Mr Shey. She has two daughters. When not writing intriguing historical romance, where goals and desires of sassy, unconventional heroines and ruthless men, mean worlds collide, she plays the odd musical instrument and loves what in any other country, would not be defined, as hill-walking.

a Rafflecopter giveaway
Posted by Unknown at Friday, January 17, 2014