Release Event Meant for Her

Title: Meant For Her 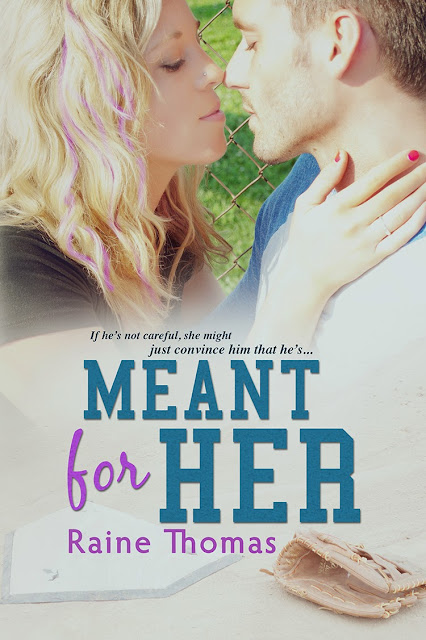 Photographer Sierra Stratton views the world through a lens all her own. She has an uncanny sense about people, something that often causes her trouble. When she meets the
sexy and brooding Evan Dorsey, her intuition tells her he’s suffering, and she
wants to be the one to help him.

Evan isn’t open to help from anyone, however. His focus is on his Major League career
and making himself as marketable as possible for his upcoming free agency. He
plans to ride out the season in Atlanta and then sign with another team, away
from the painful memories that haunt him.

Someone’s eager to send him on his way, too. Between anonymous threats and equipment
sabotage, it’s clear he’s earned himself an enemy along the way. To him, it’s
one more sign that he’s right to move on.

But Sierra threatens his conviction. Her contagious smile proves hard to resist, as
does her kiss. She tempts him in ways he never anticipated, making him question
his plans for the first time. If he’s not careful, she might just convince him that he’s meant for her. 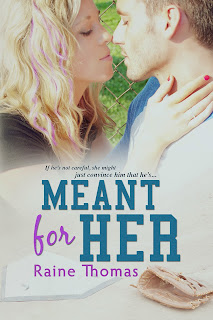 Excerpt
She saw one of the building’s employees, Oliver Werner, sitting behind the counter
and crossed the lobby to greet him. He got to his feet, towering over her by
more than a foot.
“Hi, Oliver.”

She winked at him. “This is Evan Dorsey. He’s checking out 4-B.”
“Is that right?” Oliver held out his hand and Evan shook it. “Pleasure to meet you,
Mr. Dorsey. Can’t find a better place to live in this city, I assure you. We’ll take real good care of you here.”

Sierra wondered if it was a coincidence that his dark blue eyes shifted to her after he
said that. In either case, her pulse quickened.

What harm could there be in fantasizing about a compliment from a hot ballplayer? It
was healthy, really.
“Thanks, Oliver. We’ll be down in a bit.”
They headed to the elevator. She punched a code into the keypad to the right of the
doors. As they closed, she looked at Evan to explain what she’d done. He was
staring at her. She expected him to look away when she caught him.

“When you’ve signed the lease, you’ll get your own code,” she said.

“When I sign it?”
She smiled. He might not have made up his mind about moving in just yet, but she
already knew how this was going to end.

“There are four apartments each on floors two and three,” she continued as though she
hadn’t heard him, “and two larger apartments on four. Only the tenants on each
floor can access their floor.”

“Unless they give the code out to everyone they know.”

“Sure. We do change the codes regularly to try and prevent issues, and ask tenants to
let us know if there’s any reason they need their personal codes changed. As
with most secure buildings shared by multiple tenants, nothing is guaranteed.”
The elevator stopped and the doors opened up into a long hallway with hardwood
floors and a vibrant carpet runner. Two large windows along the left side of the
hall allowed sunlight to flood in. A few framed black and white photographs of
some of the more interesting architectural elements of the complex hung along
the right wall. The door to 4-B was straight ahead at the end of the hallway.
Halfway there, they passed the door to 4-A on the left.

“Who lives in that apartment?” Evan asked.

She paused as she reached the door to 4-B. “Aunt Caroline didn’t tell you?”

She turned and unlocked the door to 4-B. They walked in, neither of them mentioning
that she hadn’t answered his question. She started talking as she moved from
room to room, figuring he was listening even if he wasn’t following her.

“As you can see, this apartment has lots of character and natural light. It’s over
seventeen hundred square feet and has two large bedrooms, two full baths.
Separate laundry. The kitchen has been completely updated with granite and
stainless steel. Natural hardwood floors throughout. Neutral paint on the walls,
but you’re welcome to change it once you move in. There are two real brick walls
and exposed ductwork to enhance the loft feel. It’s a very open floorplan with—”

She turned and almost collided with Evan’s chest. Apparently, he had been
following her. 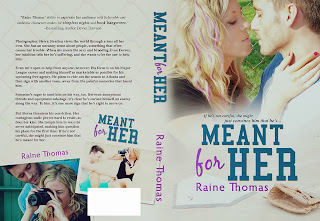 Link to see the pic


Sierra Stratton was an unnamed character in my first New Adult romance, For Everly. She was a second photographer in what has now become a well-known photo shoot scene in that story.I didn’t know I would be writing her story until after For Everly was released, but once Sierra started talking to me, I couldn’t rest until I had it written.Upon first glance, it might appear that Sierra is a character without any flaws, but that’s not the case. She’s a “people pleaser” who doesn’t like to see anyone struggling or in pain. This desire to be nice to others whom she feels need help doesn’t always work in her favor, though, and it actually drives her friends and family crazy. She’s just as likely to get herself into trouble as she is saving others.
That doesn’t mean that she’s not strong and independent. On the contrary, Sierra has built a thriving photography career for herself at a young age, and her family relies on her for aspects of their own businesses. She’s also dedicated when it comes to supporting those she loves. Once she sets her mind on something, it’s nearly impossible to divert her from her
course.
At five-feet, six inches tall, Sierra packs a lot of energy into a slender frame. Her sunny blonde hair is often streaked with color, and between that, her diamond nose stud, and some select tattoos, she truly looks like the creative young artist that she is. What captures Evan’s attention the most, though, are her dimples. Since she’s a generally happy person, he gets to enjoy the sight of them a lot!

Author’s Take on the Leading Male: Evan DorseyLink to see the pic

Evan Dorsey is a sexy, brooding male with a checkered past. After writing For Everly, which features a more stable, gentlemanly male lead, I wanted to write about an enigmatic guy with a dark edge to him. Early readers of Meant for Her have told me that there were times in the story where they wanted to hit Evan, and other times that he made them positively swoon. Fortunately, that’s just how I wanted him to come across.
As a professional baseball player, Evan enjoys living a rootless existence.  The one person he had tying him to a location dies tragically just two months before the beginning of Meant for Her, and he’s determined not to get so invested in a person or place again. His resistance to forming attachments sometimes makes him treat others in ways intended to drive them away, a form of self-sabotage.
Once an attachment does form, however, Evan is fiercely loyal and protective of his friends. He’s not afraid to get physical if it means defending someone he cares about or protecting someone who’s being bullied. There’s a tenderness beneath his gruff exterior that surprises even him on occasion.

Physically, Evan is a sublime specimen. He works out daily and takes care of himself, wanting to remain in prime athletic condition. He bears a variety of tattoos on his chest, back, and arms, all of them having meaning to him. His short, dark hair and intense blue eyes combined with his Australian accent and shiny black Harley-Davidson all serve to make him one irresistible rascal.


Author’s Favorite Quotes from Meant for Her

“How’d you get up here?” Evan asked, trying to keep Miller and Beck from flying out
into the hallway.

Cole grinned. “I happen to know the property manager really well. She’s seen me in my
underwear doing naughty things.”

“Ooo,” Hannah giggled. “If you could get your new neighbor to say, ‘No worries, mate,’
that would be fan-freaking-tastic.”

Poking Hannah in the side, Zoe said, “How cliché. Next you’re going to want him to grill another shrimp on the barbie.”

“Only if he says it before he does.”

“Just so you know,” he said, “I’m officially offering my services in case you need
help getting yourself back to rights.”

“Are you? That’s very neighborly of you.”

“I think I’m starting to get the hang of this neighborly thing.”

“It would seem so. Sadly, since your suggestion would lead to at least one entire
day of hot sex and you have company coming, I’ll have to take a rain check.”

“I’ve cancelled on Cole before. I think he’s getting used to it.”

“Alas, I can’t afford the sex-a-thon distraction today with the big shoot to prep for.
You’ll have to work on your timing, neighbor.”

Shaking his head, he walked into the empty guestroom and opened the cabinet door. Sure
enough, two blue eyes surrounded by a dark mask of fur stared back at him.

“You’re lucky you resemble Batman in his Batcave,” Evan said, reaching in, pulling him
out by his scruff, and holding him at eye level. “It’s saving you from an epic ass-whooping right now.”

“I’m serious,” Evan said as he walked to the cage. “You may think I’m soft on you
because you’re smart enough to hide under the sink, but—ah, hell. I’m so damn
proud right now.”

Thirty seconds later, his cell buzzed in his pocket. He pulled it out and saw that he
had a text from Sierra.

Blinking, his gaze moved to the wall separating his kitchen from her bedroom. He looked at
the doorway where Geoff had just departed, then back at the wall.

Shaking his head and grinning, he typed, Faked a date, did you?IDK what you mean.I’m in the dark with a hot guy who’s panting
all over me.
Leo doesn’t count.

Then I faked a date.
Bad girl. Come on over if you’re up to it.

Playlist  Video Links for MEANT FOR HER 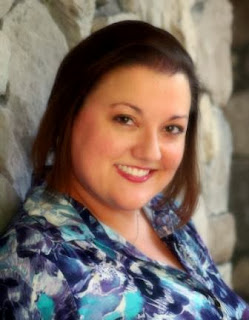 Raine Thomas is the author of bestselling Young Adult and New Adult romantic fiction,
including the award-winning Daughters of Saraqael Trilogy and Firstborn Trilogy. She is a proud member of Romance Writers of America and is a contributing blogger to The Writer's Voice. When she isn’t planning weddings, writing, or
glued to social networking sites, she can usually be found on one of Florida’s beautiful beaches with her husband and daughter or crossing the border to visit with her Canadian friends and relatives.